Death Tolls of the Iran-Iraq War 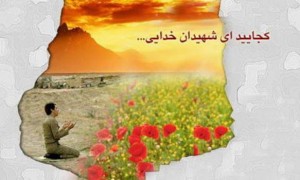 The Iran-Iraq War of 1980-1988 scarred both countries deeply, with horrific fighting at the battlefront and long-range missile attacks on cities.

But postwar censuses in Iran and Iraq suggest that the war’s death toll may not be nearly as high as is commonly thought.

The war is often said to have caused half a million or more deaths. The Battle Deaths Dataset, developed by a team of political scientists, estimates fatalities at more than 600,000. The Correlates of War Project, another major scholarly dataset, estimates 500,000 Iraqi dead and 750,000 Iranian dead.

Iranian and Iraqi government officials offer lower — though still terrible — casualty figures. One of Saddam Husayn’s generals, Ra’ad al-Hamdani, recently estimated that 250,000 Iraqis were “martyred” in the war with Iran, including 53,000 killed in the battle for Shatt al-Arab. The Iranian Basij [copy of material on dead link] paramilitary organization counted 155,081 “martyrs” of direct engagement with Iraqi forces, plus 16,154 Iranians killed in the “war of the cities.” A reformist Iranian newspaper reported 172,056 fatalities at the front and 15,959 fatalities from air raids and rockets. [Update, December 24, 2013: A scholarly article based on the records of the Veteran and Martyrs Affairs Foundation, a government agency, recently counted 183,623 Iranian deaths as a result of the war.]

Even these official tallies may be overestimating the death toll of the war, if we believe birth-cohort data from the Iranian census of 1996 and Iraqi census of 1997, the first national population counts after the war ended in 1988.

If either side suffered hundreds of thousands of war deaths, we would expect the censuses to display a large dip in the cohorts of young males who served at the front, as compared with females of the same cohorts and with males in preceding and succeeding cohorts. Neither census registers declines consistent with this scale of death. 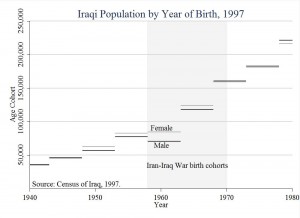 On the Iraqi side, five-year birth cohorts from the 1997 census (see chart at right) were reported in the 2005 edition of the Statistical Abstract of the United Nations Economic and Social Commission for Western Asia. (Tables from Iraq’s 1997 census were also reported in earlier editions of the Statistical Abstract, but they included an abnormally large number of males with unspecified ages and a correspondingly low number of males born in 1953-1957.) The number of males was consistently at or below the number of females for each cohort born before the late 1970s. Among Iraqis born in 1958-1962, the number of men and women is unusually low, and the gap is twice as large as for the preceding and following cohorts — about 10,000 fewer males than females per year instead of 5,000 fewer.

If 500,000 Iraqis died in the war, or even 250,000, we would expect to see larger declines in the age cohorts that served at the front — males born between 1958 (age 22 at the outbreak of the war) and 1970 (age 18 at the end of the war). On average, excess deaths among Iraqi men of that generation would total tens of thousands per year, and we would expect to see excess deaths among males throughout the period, not just in the 1958-1962 cohort. Males actually outnumber females born in 1965-1971, according to annual birth-year data derived from a sample of the 1997 census archived at the University of Minnesota. (This sample — and possibly the census totals as well — excludes three governorates in the Kurdish region that were in effect autonomous from the Iraqi central government after the 1991 Gulf War.) 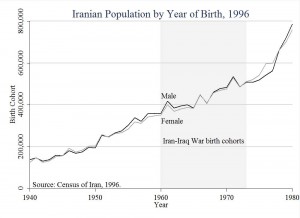 On the Iranian side, the census of 1996 (see chart at left) shows the number of males equal or greater to the number of females for almost the entire birth cohort that was most likely to have served in the military, from 1960 (age 20 at the outbreak of the war) through 1973 (age 15 at the end of the war). A similar pattern emerges from the Iranian Population Survey of 1991 and the Iranian census of 2006.

If 750,000 Iranians died in the war, or even 150,000, we would expect to see considerably fewer males than females in the birth cohorts of the 1960s and early 1970s. Instead, the only cohorts with fewer males than females are from the 1940s, too old to have served in the war in large numbers, and the mid-1970s, too young to have served in large numbers, even at the end of the war.

Now it is possible that the Iranian and Iraqi censuses were inaccurate. It is also possible that they were politically manipulated. And perhaps international migration mitigated the death toll, though it seems unlikely that migrants would have fit neatly into the birth cohorts of the Iran-Iraq war.

But if we believe the census figures, the death toll from the Iran-Iraq war was far less than the scholarly estimates of 600,000 or 1,250,000. It may even have been lower than the government figures of 250,000 Iraqi fatalities and 155,000 Iranian fatalities.

The Iran-Iraq war was, by any measure, a terribly bloody cataclysm. But it may not have been so bloody as we imagined.