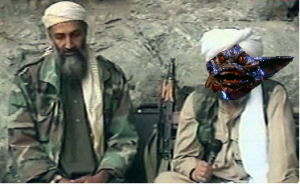 Rationally, you may know that terrorism has proved to be a relatively minor threat to public safety. You may know that murders are rarer than they’ve been in half a century, and wars are less numerous than they’ve been in a generation. Violence will never go away entirely, but most people in the world — especially in wealthy countries like the United States — live in unprecedented security.

You can know this rationally, and still feel insecure. There is plenty of news to be concerned about, and we scare ourselves constantly with movies and television and video games and books that make danger look imminent.

For example, take Gremlins (1984). If you barely remember the movie, here is a plot summary: Dark-skinned, human-like creatures are brought to America in captivity. For a while, they seem musical and entertaining. But when they escape from captivity, they turn darker-skinned and vicious. They listen to blues music, breakdance, and kill for fun. America is faced with ruin until some white kids manage to get all of the gremlins into a movie theater and blow it up.

As it happens, all of these movies were created by the same man, Chris Columbus, a writer and director who seems to have an uncanny grasp of the anxieties of white Americans.

While Columbus was breaking into the movie business as a protegé of Stephen Spielberg, America was embarking on a paranoid effort to tighten its criminal law with mandatory sentencing and a racially biased war on drugs, including stiff prison terms for powder cocaine (used primarily by whites) and even harsher prison terms for crack cocaine (used primarily by blacks). The sense of insecurity that Columbus tapped into led to an unprecedented prison-building spree. America’s incarceration rate, which had been stable for decades, tripled between 1975 and 1990.

Columbus turned for several years to smaller-scale family stories such as Mrs. Doubtfire (1993). Then at the turn of the millennium, he returned to the themes of threat and violence, this time on an epic scale, directing the first three Harry Potter movies (2001-2004) and the first Percy Jackson movie (2010) — more white kids facing violent threats, which they conquer by embracing their own knack for violence. In the new era, Columbus’s threats are not local and comic but evil itself, seeking domination on a cosmic scale.

These movies coincided with the global war on terror, which was grounded in a similar sort of anxiety. Just as the allegories of Harry Potter’s medieval England and Percy Jackson’s ancient Greece erupted into the contemporary world of muggles and mortals, the war on terror reflected a fear that epic evil could be lurking anywhere. In response to this anxiety, the United States government upped national security spending by a trillion dollars in the decade after 9/11, launched two invasions and additional bombardments, and scaled back its commitments to civil liberties.

Now, as more and more Americans are questioning these measures, Chris Columbus is dropping the allegory and making the anxiety personal. According to news reports, he plans to make a movie out of the novel Home Front (2012), by Kristin Hannah, another story about white kids in danger. This time, the threat comes from rebellion in Iraq, half a world away from the children’s home in small-town America. Their mother is an Army National Guard helicopter pilot whose deployment to Iraq threatens to destroy their family.

The villains in this story are nameless Iraqis attacking the dutiful American soldiers who “went to fight terrorism in Iraq,” according to the novel. (The novel fails to note that there was almost no terrorism in Iraq before the U.S.-led invasion in 2003.) Every Iraqi is a potential attacker, even women and children who “smile at [an American soldier] and then blow up.” Their motives are unimportant for the novel — all we know is that they are violently angry at Americans.

There is one attempt in the book to explain the source of the threat. The children’s father proposes that some Iraqis may be upset about the invasion and occupation of their country, which were undertaken by the U.S. government on false pretenses. But the novel rejects this explanation. The father is portrayed from the outset as a lousy parent and an even worse husband, who has lost his moral compass. Eventually he comes to his senses through an appreciation of the sacrifices that his wife and other American soldiers willingly shoulder on his behalf. He concludes that civilians have no right to debate foreign policy:

He prided himself on his intelligence, but he’d been wrong, blinded by selfishness or politics or intellectualism. For years, he’d watched news reports about the global war on terrorism and followed images of soldiers in the desert and he’d thought about the politics of it all, about weapons of mass destruction and George W.’s declaration of war and the wisdom of arming and sending out troops. He’d argued with colleagues about it — while he sat safe and warm and protected in his country. He’d argued about the true cost of war. He hadn’t known s—.

According to the novel, Americans who sit “safe and warm and protected” should not question the wisdom of war. They should especially avoid intellectualism. Their sole role is to support the troops.

This is apparently the next story that Chris Columbus wants to tell. In this vision, America is so afraid of terrorism that it cannot tolerate debate. Factual information is treated as irrelevant and unpatriotic.

The reasoned consideration of risk must constantly contend with stories like this that whip up anxieties and feed insecurities. Even if we know how rare violence is, the specter of gremlins continues to terrify us.