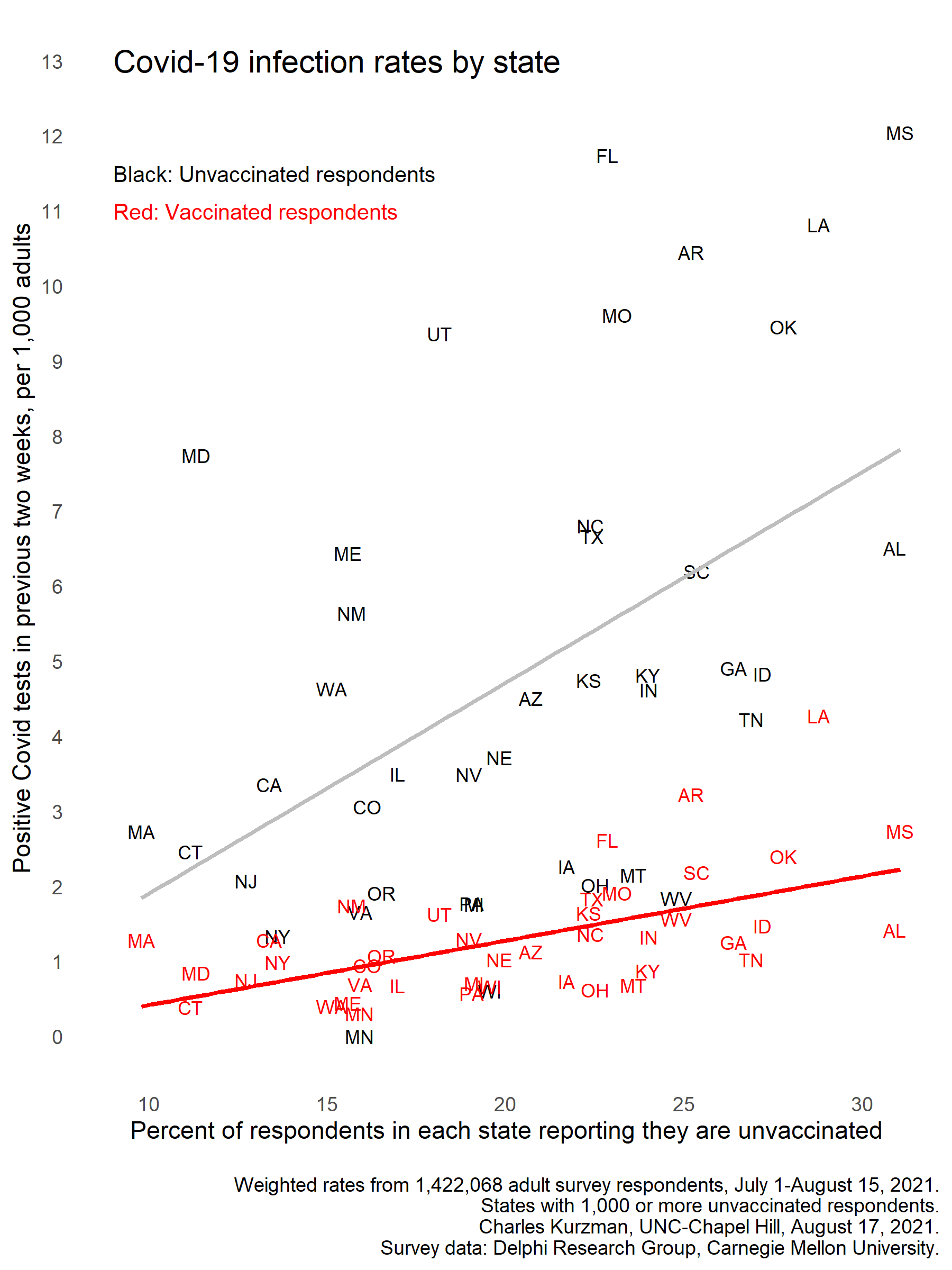 In Louisiana, where more than a quarter of respondents said they were not vaccinated, 11 out of 1,000 unvaccinated adults reported that they had tested positive for COVID-19 in the previous two weeks, compared with 4 out of 1,000 vaccinated Louisianans.

Occupational Shortages After the Vaccine Rapture 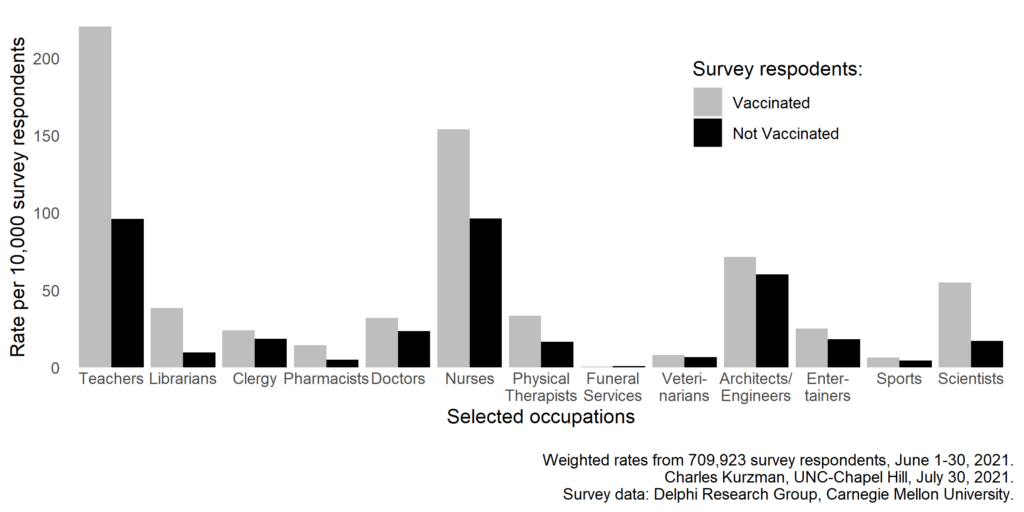 If Covid-19 vaccines are deadly, as some conspiracy theorists claim, then America’s occupational structure may look a little different after the vaccine rapture. For example, there are more than 200 preschool and K-12 teachers among every 10,000 vaccinated Americans, but fewer than 100 among every 10,000 unvaccinated Americans, according to a large-scale survey of adult Facebook users conducted by the Delphi Research Group at Carnegie Mellon University. More… 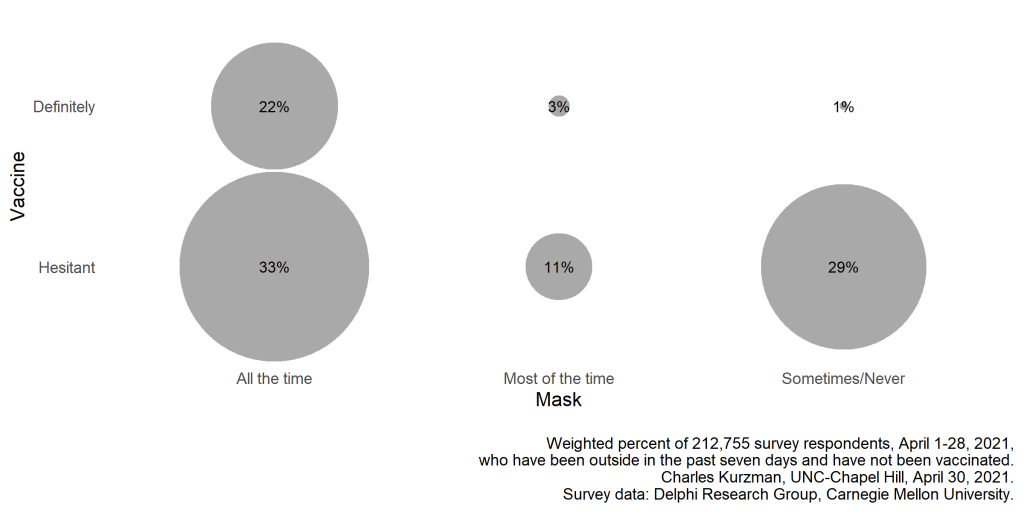 According to a survey of U.S. Facebook users conducted by the Delphi Research Group at Carnegie Mellon University, most people who said they were reluctant to get the vaccine reported that they wore a mask outdoors all or most of the time. On the other hand, almost all of the non-mask-wearers said they were not planning to get the vaccine — and they were more likely to explain their reluctance by saying they didn’t trust the government (53%), as compared with 24% of vaccine-hesitant respondents who said they wore a mask regularly.

How Much Does Working at Home Lower Covid-19 Infection Rates? 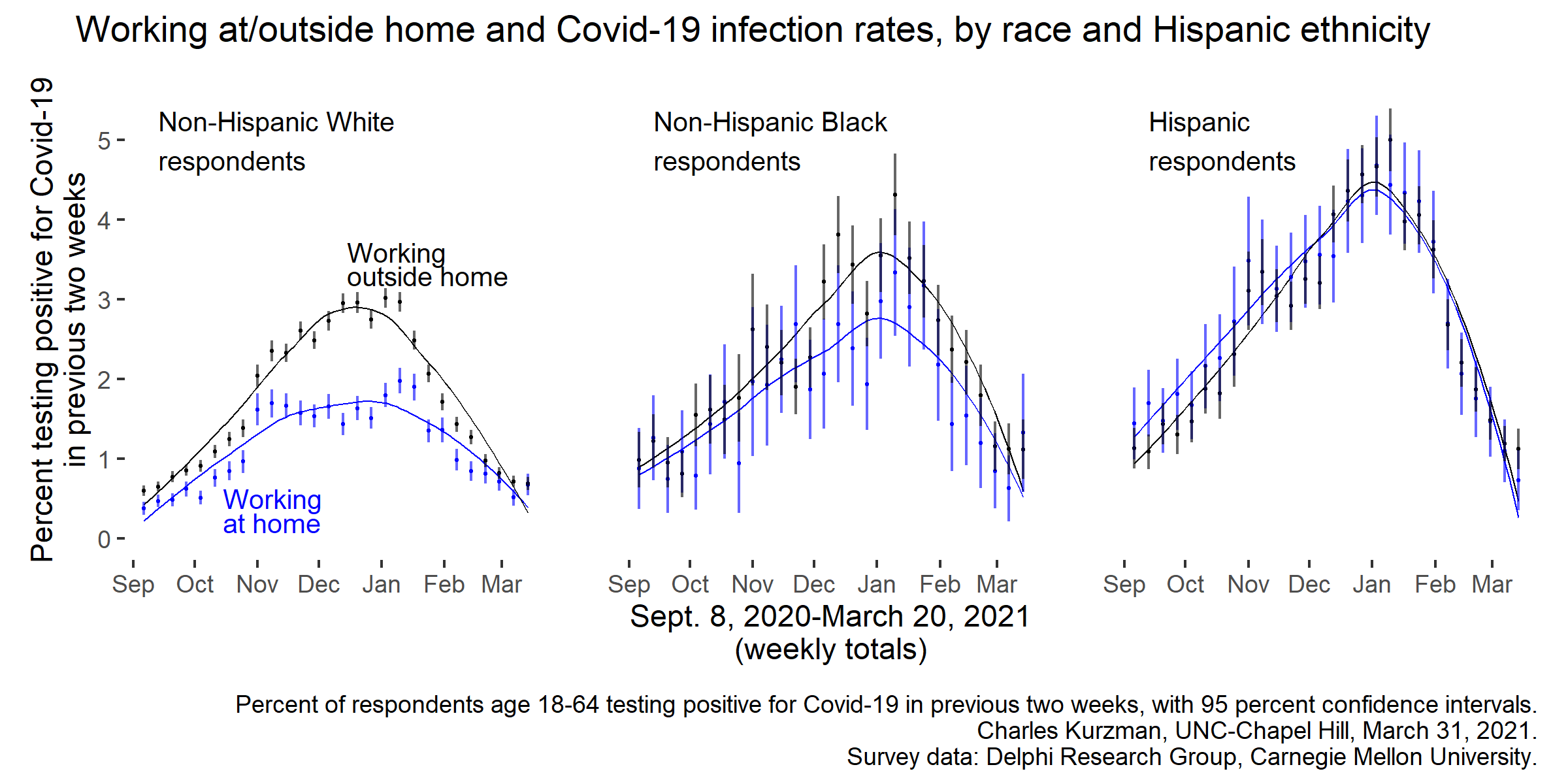 According to a daily survey of more than 50,000 Facebook users conducted by the Delphi Research Group at Carnegie Mellon University, people working outside the home became significantly more vulnerable to Covid-19 in Fall 2020. But recently released survey results, aggregated by self-reported race and Hispanic ethnicity, show that working at home reduced infection rates only for respondents who self-identified as white and non-Hispanic. Among respondents who self-identified as Hispanic, or as Black and non-Hispanic, infection rates for people who worked at home and people who worked outside the home were higher and not statistically different from one another. (Rates for people who were not working at all were inconsistent.) 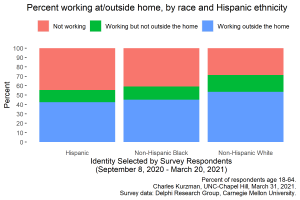 Mask-Wearing and Biden Vote-Share, by County 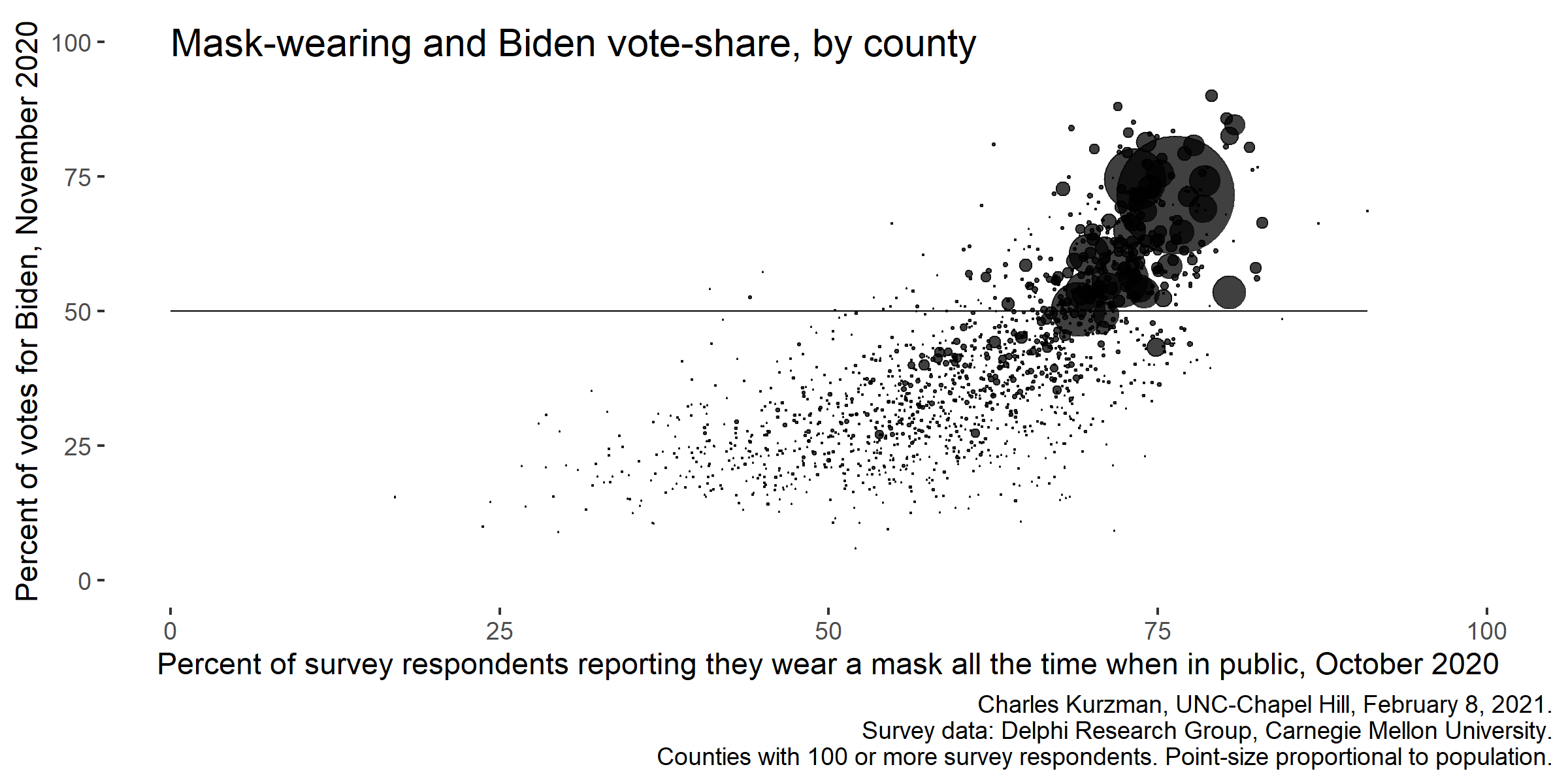 Counties where more people reported wearing masks in October 2020 were more likely to vote for Joseph Biden for president in November 2020. Working outside the home has gotten significantly more dangerous since mid-November in the U.S. This massive dataset is being collected by the Delphi Research Group at Carnegie Mellon University, which has surveyed an average of 70,000 Facebook users every day since April 6, 2020. Respondents are asked about Covid-19 testing and symptoms of influenza-like illness, as well as a set of questions about their recent activities. Respondents were also given the opportunity to type in their zipcode, which I linked with zipcode-level demographic data from the Census Bureau.

Respondents who had worked outside the home in the previous five days have been 13 percent more likely to report a recent onset of influenza-like illness than other respondents, although the gap has not been statistically significant since April. (The survey defined influenza-like illness as a fever of 100°F or higher plus one or more of the following symptoms: sore throat, cough, shortness of breath, or difficulty breathing.) Because the survey asked only about work in the past five days, this dataset can’t tell us whether essential workers tested positive more frequently than other respondents — it often takes more than five days for respondents to seek testing and get test results. Respondents who worked in healthcare and eldercare have been 56 percent more likely than other respondents to test positive for Covid-19, although other respondents began to catch up in July. No other occupation categories were identified in the survey, although a new version of the questionnaire is launching this week with more comprehensive occupational information. This survey sample, weighted to be representive of the United States population as a whole, confirms the racial disparities that we already know from county-level and state-level data collected by the Johns Hopkins University Coronavirus Research Center, The Atlantic’s Coronavirus Tracking Project, and the New York Times’s Coronavirus Map.

It also gives a vivid sense of the spread of Covid-19 since the United States began to ease its lockdown this spring. In the first weeks of May, 0.3 percent of the survey’s respondents reported that they had tested positive. By early August, three months later, the proportion had tripled. The survey doesn’t tell us about the people who didn’t know they were infected. It also doesn’t tell us about people who who have succumbed to the virus, or were too ill to take the survey. We would need randomly-sampled virus-testing to get a fuller picture of the prevalence of the disease. But since the Trump administration has failed to undertake such an initiative, this survey may provide the most detailed data we will ever have on the early months of the pandemic’s infection of America.